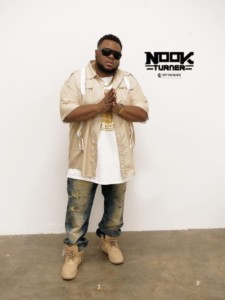 NOOK Turner took the world by storm with inspiring, poignantly crafted, bold lyrics and an energetic performance style that captivated many audiences throughout the nation! He creates “freedom music” that touches all aspects of life! As to date, NOOK Turner is a very accomplished artist on the Texas music scene. He’s had successful collaboration songs with platinum artists Ying Yang Twins, DJ Michael “5000” Watts and more. He is an artist whose passion for greatness for himself and his community fires everything he does.

He is the founder of J.O.I. Community Outreach, a non profit that produces Jump On It Festivities. Since 1997, Jump On It has been annually responsible for executing large community events, festivals and youth education. He has been mentioned in Billboard Magazine and named “Top 25 under 25 in America” by the Future 500 Magazine. His music and philanthropy has been covered throughout the years on KXAN, KVUE and FOX to name a few. Paying homage to his hero Nat Turner and his mentor the late Dorothy Turner, NOOK Turner is here specifically for those who love music with substance and true passion. He has a great future in front of him that’s driven by his vision of becoming hip hop’s New “Commander and Chief”!